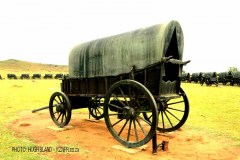 The Battle of Blood River between the Voortrekkers led by Andries Pretorius and the Zulu's led by Mhlela commenced on the morning of 16 December 1838. The battle had been preceded by the murder of about 500 men, women and children by Dingaan's Impis at Blaukrans and Moorddrift earlier in February 1838. The battle took place on the banks of the eNcome River, a tributary of the Buffalo River. The site was well defended in a laager formation, formed with 64 wagons interlocked and with supporting fire from about 470 men and a few canons. The Zulu force consisted of between 15000 and 30000 men, of whom about 3500 were destined to die in their unsuccessful attack, with no deaths on the Boer side. The Boers had made a vow that they would forever recognize this day if they were to be spared by God and build a Temple in remembrance. This day became "The Day of the Vow" This album has images of the site, replicas of the wagons interlinked as they were, the Extensive Museum and other plaques and monuments commemorating the event . The Zulus have commemorated the battle with a Museum on the opposite side of the river, images of which will appear in a separate Gallery. 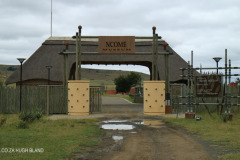 The eNcome Museum is situated across the river from the Blood River Monument. The eNcome Museum records the events that took place here in 1838, giving the history and backdrop to the defeat of the Zulu impi by the Boers. The Museum also gives a graet deal of information on the Zulu Kingdom, it's heritage and lineage. The site also has large auditorium and conference centre. 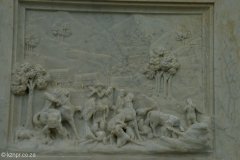 Bloukrans was the site of the massacre of 41men,56 women, 185 children and 200 retainers at the hands of Dingaans Zulu Impis on 17 February 1838, after the murder of Piet Retief. These Voortrekkers had arrived in Natal in November 1837.The site of the massacre has monuments and more recent commemorative structures.The site is accessed off the road close to Chievely Station. 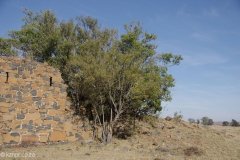 Fort Pine lies East of Dundee on Sheepmore Farm.This seldom visited site was built by Royal Army Engineers, in 1878 to protect the citizens of Dundee in the lead up to the Anglo Zulu war. The Fort overlooking the Buffalo River is constructed of substantial stone walls and has a well in the courtyard.The Fort was inhabited by the military but no action ever took place in the immediate vicinity.The fort is well located and still in good condition. Pieters Laager also in the vicinity was erected as a haven for the same reason. 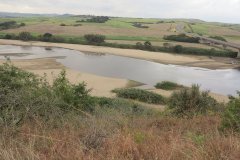 Fort Pearson named after Colonel Charles Pearson, the Coastal column Commander is on the south bank of the Tugela. The column stationed here crossed the Tugela on sunday 12 January 1879 at the commencement of the Anglo-Zulu war. Another, Fort Tenedos named after the British warship anchored at the mouth of the Tugela , was built as a bridgehead immediately opposite Fort Pearson. The sites have cairns, interpretative displays and there are two military cemetaries near Fort Pearson. The ultimatum tree site is below Fort Pearson on the banks of the Tugela. Also close by is the Harold Johnson nature reserve. 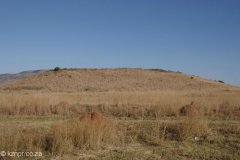 Little remains of these Forts or redoubts used during the invasion of Zululand in 1879. Fort Menne(Umvoti Laager) near Greytown was built in 1878 by farmers for defensive reasons and occupied briefly in 1879 and again during the rebellion of 1906. The site is difficult to locate and has recently had a grader put through the site. Fort Bengough, named after Major Harcourt M. Bengough was built in 1879 and occupied for some time by members of the 2nd Battalion of the 1st Regiment,Natal Native Contingent. The site is close to the eastern approaches to Pomeroy on a knoll. Fort George,close to the Bethal Mission is very hard to locate in the grasslands. The Fort had two pentagonal redoubts connected by breastworks which allowed for flanking fire. The Fort was used as Lt Col. Baker Russell's forward base and also occupied by two companies of 94th,Transvaal Rangers and 2nd Batt. N.N.C. 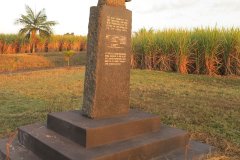 Colonel C Pearson after crossing the Tugela proceeded to cross the Nyezane river near Wombane hill. He immediately came under attack on 22 January 1879 but managed to fend it off. The site is marked and is just a few metres off the Eshowe road. Pearson went on , only to become besieged at Eshowe. A relief force later camped near Ginginhlovu and also came under attack on 2 April 1879 which was also repulsed. The battle site is also marked and a cemetary of those killed is nearby. The album also features Fort Chelmsford graves relating to members of General Crealok's men of the 1st Division who died in 1879. The site is north of Ginginhlovu in a cane land. 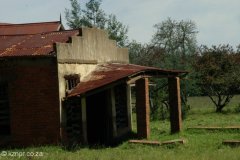 Helpmekaar is a small Village on top of Biggarsburg chosen by Chelmsford as assembly point in 1878 for invasion of Zululand - Contains a military cemetary,Police Station & old trading stores. 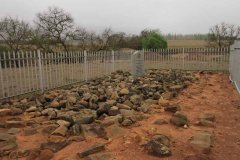 This album contains images of Fort Clery, the Filter Larsen Monument, Intombe Spruit battlefield and the military graves in the Luneburg Cemetery. The battle of Intombe Spruit on the 12th March 1879 was between about 500 Zulus under the command of Prince Mbilini waMswati and 104 British soldiers of the 80th defending a supply column. Captain David Moriarty who was commanding the troops was killed in this engagement.The soldiers were taken by surprise and between 60 and 80 British soldiers died, some of whom are buried in a mass grave on the site and others in the Luneburg Cemetery, close by. Fort Clery was built in 1878 to bolster the defences of the Luneburg laager and protect local families from the marauding Zulus. It was built by the 90th Light Infantry under Major C.F.Clery and later manned by the 13th and Kaffrarian Rifles and then the 80th. The Fort was never defended in action. The Filter - Larsen monument commemorates the lives of J H Filter and Larsen who were killed by Zulus in 1879 whilst attempting to prevent them stealing cattle. 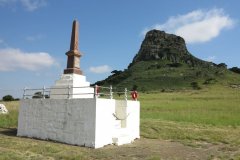 Fort Marshall was occupied between May & July 1879 by the 24th Regiment. There are 11 soldiers buried there, most dying of wounds from the battle of Ulundi. The ramparts and graves are still visible. Isandlwana was the scene of the defeat of Imperial & Colonial forces on 22 January 1879 mostly from the 24 Regiment , Natal Carbineers and Natal Native Regiments, by the Zulu army. This Gallery also has images of the St Vincents Church and visitors centre. 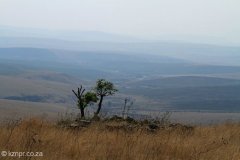 This Gallery has images of the many forts and graves that are scattered in the area. Included is Fort Victoria on Koningskroon Farm built in August 1879 by the 58th Regiment. (Lt Col Clarke\'s column). Fort Evelyn, built 23 June by the 58th Regt and N Battery, 6th Brigade R.A. This fort is close to the road but the most conspicuous feature is the grave of Drum Major W. Brown who died on 3 August 1879. There are 2 Forts at Mtonjaneni used by Chelmsford\'s forces prior to launching his attack on Ulundi in 1879 and 1 thought to have been used after. Close by is Dingane\'s spring. Also included in this gallery at KwaMagwaza are the graves of Lt. Scott Douglas (21st Regt) and Cpl. W. Cotter of the 17th Lancers who were ambushed by Zulus whilst delivering a message from Lord Chelmsford to Fort Evelyn. There is also the grave of an unknown soldier on Mondi\'s Rooipoort farm alongside some civilian graves. 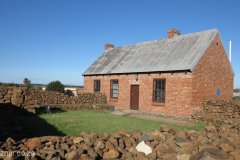 Fort Ameil Hospital & Commissariat was built in 1877 by the 80th Regiment and occupied in 1879 during the Zulu Wars by the 4th King\'s Own. It was also occupied during both Anglo Boer Wars and has the graves of soldiers killed nearby on 8 February 1881. The fort has substantial stone ramparts and also a museum. 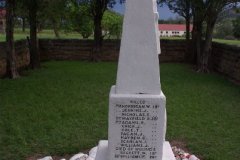 The defence of Rorke's Drift on 22 January 1879 followed the defeat of the British forces at Isandlwana and commenced at 16.30 pm and went on through the night to about 4 am. The Mission Station at the foot of the Oskarberg was held by 1st & 2nd Company of the 24th Regiment. It had been left under the command of Major Henry Spalding.The battle eventually left about 370 Zulu dead (4000 under the command of Prince Dabulamanzi kaMpande), and 17 British soldiers dead out of a force of about 100 men. The Zulu's eventually withdrew. Eleven Victoria Crosses were won in this engagement. The gallery shows images of the museum , chapel, memorials and graves of the Zulu and British soldiers. This gallery also has images of the small village of Elandskraal in the local vicinity. This album also has images of the Lutheran Mission, military & civil graves, north of the river and other graves at Rorkes Drift and images of Fugitives Drift where Lt Melville VC and Coghill V.C. were killed. 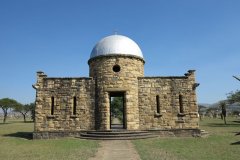 After the defeat at Isandhlwana, the British were determined to take revenge and defeat the Zulu\'s led by King Cetshwayo kaMpande, and crossed the White Umfolozi on 4 July 1879 with a force of approximately 5124 men. Led by Lord Chelmsford,battle took place that day which led to the Zulu defeat. The gallery shows the battle site (oNdini), monuments to the about 1500 Zulu dead and graves of the 12 British soldiers killed in the battle.Also included in the gallery is Fort Nqlela on the south bank of the Umfolozi where the British forces camped prior to the battle. 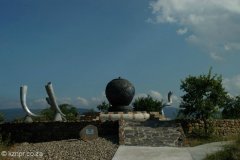 This album features the eMakhosini Heritage Park Monument that overlooks the eMakhosini valley where early Zulu kings lived and are buried. Amongst those buried in the area and those who had Royal residences here are Shaka, Dingane, Mpande and Cetshwayo who ruled from 1816 to 1884.Also in this valley is the grave of Voortrekker leader Piet Retief at kwaMatiwane or the hill of execution and also that of Dirkie Uys. The album has photos of Owens Camp in the eMakhosini reserve which is a good stop over for those exploring the area. Outside to the south east of Ulundi is Ondini III which was the site of the last Royal residence of King Cetshwayo when he was released from exile in 1883. The residence was attacked and destroyed by the Mandlakazi in the Zulu civil wars that followed British annexation of Zululand. A monument has been erected on the site. 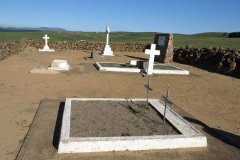 The Nkambule battle of 28 March 1879 was between Zulu Regiments under the command of Inkosi Mnyamana and a British force under the Command of Colonel E Woods V.C. and Lt. Col. Redvers Buller. The British forces including Prince Albert\'s 1/13 and 90th Perthshire Light Infantry numbering about 2000 in a well sited and prepared camp were ranged against an estimated 20000 Zulu warriors.The battle that lasted from about 13.45 pm to 17.30 pm resulted in about 2000 Zulu casualties and 29 British killed.The site is well sign posted and the battle square marked out. The Monuments are about 500m to the west of the crest of the battle site.