Posted at 16:09h in Uncategorized by Hugh Bland

To the south of the Pick n Pay Hyper in Durban North is the Muslim Cemetery. Within the cemetery is the sole and lonely military grave of Steward Belal Hassan. Hassan was a crew member of HMS Trent who died on 12 January 1918. Disease was a major killer of men who served in this theatre and Hassan was probably a victim of disease whilst serving. 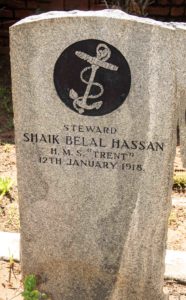 HMS Trent launched in 1899 and built by Robert Napier and Sons was owned by the Royal Mail Steam Packet Company and was 5525 GRT and 124.97 metres in length and with a shallow draught of 9.85 metres. It had a single screw, two masts, triple-expansion engines and a top speed of 15 knots.

Trent was requisitioned as a depot ship in 1915, saw service in Gallipoli, Malta and then in support of monitors ‘HMS Mersey’ and ‘HMS Severn’ in July 1915 in their attack on SMS ‘Konigsberg’ on the Rufiji River in German East Africa. Trent continued to serve until the end of the war, was returned to Royal Mail Steam Packet Company, before being scrapped in Rotterdam in 1922.