Posted at 15:03h in Uncategorized by Hugh Bland 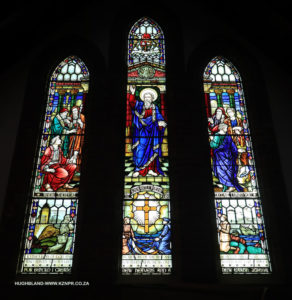 Presbyterians first arrived in Durban in the 1850’s and their first church was in the city centre. As the city expanded they managed to get permission to buy half an acre of ground on the corner of Manning and Berea Road. The church designed by WE Roberts had it’s foundation laid in 1887

During  World War I, sixty men from Berea Presbyterian were on active service and seven lost their lives.

The lych gate on the corner of Berea and Manning roads was dedicated to a long standing rector by his daughter, Mrs Neilson.

“The church was enlarged and renovated in 1936, Neilson’s husband presented a new stained- glass window depicting the Presbyterian emblem of the Burning Bush.

Memorial windows also honour Reverend Evans, who was minister from 1919 to 1938, Henrietta Wilson, who was a former principal of Berea Road School, while a third window is in memory of those who served in World War II.

The church celebrated its centenary in 1986, but in the following years the membership began to decline, eventually to a point where the congregation was no longer sustainable.

The church has been sold and the developer confirmed this week that there are plans for a fitness centre”.