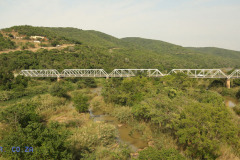 This album has images of the bridges of the north coast from Stanger to the Tugela River. The road and rail bridges have undergone many changes over the years thanks to the effect of major floods such as Demoina and the Natal floods of 1987. The upgrade of the N2 route from Durban to Empangeni also necessitated the realignment of the road to cater for heavier traffic. The bridges over the Tugela feature the old metal rail bridge near Mandini, the rail bridge adjacent to the metal road bridge, the John Ross Bridge and the new N2 road bridge closer to the Tugela mouth. The Tugela River has the largest catchment of all the rivers in KZN with tributaries like the Bushmans, Mooi, & Buffalo Rivers all draining into it. The John Ross bridge over the Tugela was lost in the 1987 floods and was rebuilt in record time using the incremental launch system. The album has plaques commemorating this achievement. Also featured are the smaller Nonoti and Zinkwazi bridges. 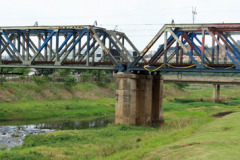 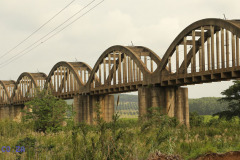 This albums has the road and rail bridges of KZN North Coast crossing rivers like the Umlalazi, and Umhlatuze Rivers. Some of the bridges are no longer on the main N2 road link that has been diverted but all are still in use. 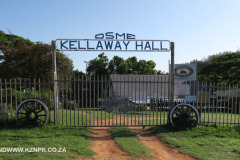 A Brief Early History of the Durban Society of Model Engineers (Originally by Brian Lester from notes prepared by the late Mr Theo Gooden) The Society was one of the first model engineering clubs outside the UK and had amongst its aims: the promotion and challenge of modelling; designing, making and or operating small versions of machine engines, tools, etc; to encourage accurate craftsmanship; to convene meetings and hold exhibitions of models for the promotion of these objects. Although some records give earlier dates, the publication “Model Engineer and Electrician" of 4 September 1913 confirms that it was established on 2 July 1913. To commemorate the inauguration of the Society, a club badge was struck. This was a 20 mm fired enamel Hallmarked Silver badge and depicting an overhead belt drive lathe and marked – Durban Society of Model Engineers 1913. One of the dedicated members who steered the Society from its inception, through the two world wars and severe depression was Harold V Kellaway. He was a man who had an interesting career in the field of engineering here in Durban. He was born in Stafford in the UK on the 20 December 1891 and trained as an engineer and a draftsman and came to Durban on 2 July 1910y. Mr Kellaway took over as the DSME secretary from Mr A C Davidson in September 1914 and held office as Chairman/Secretary/Treasurer and ultimately President up until 1960. When Kellaway Park was established it bore his name and when the move to Durban North came and we took over our present site, we again commemorated his name by naming the new building Kellaway Hall. Some premonition of the fate of Kellaway Park must have stirred in the mind of one person, who had laboured so long for its establishment, for Basil Palmer was transferred to Johannesburg. The Society was soon informed that the Kellaway Park track site was required by the City Council for the construction of the new Athlone Bridge. What a sad and tragic sight it was to see all the efforts over the years, bulldozed to the banks of the Umgeni River. So, after several years of some very enjoyable running on our first continuous track, we had to start the process all over again. The old clubhouse was however spared and this was handed over to the model yacht club for their sole use. This is a potted history of the DSME prior to the construction of Kellaway Hall. Used by kind permission of Theo Gooden and Brian Lester. Thank You. I arrived in Durban on transfer from Salisbury in January 1967, just in time to take part in developing the track site for DSME at Hinton Grove. The new clubhouse had been finished and handed over and other work completed by a contractor, including brick pillars and the tunnel. Elsewhere, the ground had to be levelled and growth removed. It is difficult now to recall just what a mess the area was and my thoughts on first sight of it were “how on earth can we ever build a track here?” Work on the track involved casting foundations to a pre-set level and this proceeded well. Due to the sandy nature of the ground, digging holes was not difficult. A pre-cast slab on top, completed the found and then the pillars could be set with slips of packing (courtesy of Theo Gooden) in between. Pre-cast beams were then laid. With the main work on the ground almost complete, attention was given to the BRIDGE. The area to be spanned was waterlogged in those days as Durban North did not have a water borne sewerage system so much water from soak pits seeped its way downhill to that low lying area as well of course as natural rainfall. 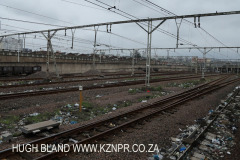 This album has images of the rail stations between Durban main station and Shongweni. Along the way one can see glimpses of Marrianhill, Kwadangeza, the many rail tunnels, and the waterfall near the Shongweni- Delville Wood stations. 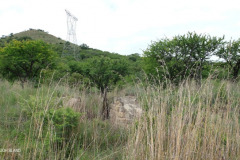 The Estcourt to Weenen railway line opened in 1906 and closed in 1983. The line runs out of Escourt along the old main road and then swings north along the ridge running through several farms like Slievyre. The old line then enters the Weenen Nature Reserve, followed by a steep descent into Weenen. This line was an important means of transporting the agricultural produce from the 3000 acres of irrigated farmland to markets. The introduction of road transport was the death knell for this line which despite attempts to save it for tourism closed in 1983. This album has images of what remains of the start and end points and of the remains of the line and structures along the way. Little evidence remains but one can still walk along the old track (devoid of rails and ballast) and access many of the old structures all of which remain in the reserve. The most striking features are the Tierkloof sandstone arch bridge, and two substantial metal bridges over which the game drives traverse. Many different locomotives operated on this line , like Class NG/G11 loco No:55 which is now at the Ixopo Paton County Railway, and NG/G13 no: 77 "Liliputian", much of them driven by Billy Bester, who spent 21 years as a driver on this line. The toatal distance of this line which became to be called the Cabbage Express is 46km starting at 1167m in Estcourt, rising to 1213 at at Haviland, a watering point and then descending through the reserve to Weenen at 866m.(Bruno Martin : Remembering The Estcourt - Weenen Line ") 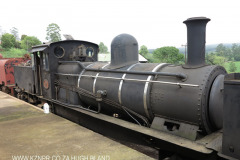 This line in the region described by Alan Paton in "Cry the Beloved Country", used to steam between the Umzimkulu and Ixopo via Carisbrooke. This album has images of the locos and rolling stock based in Ixopo and featuring NG11 No 55, which also used to run on the Estcourt to Weenen line. 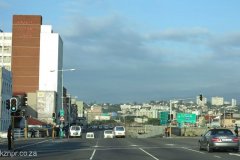 This album gives a contemporary sense of some of the major routes in KZN and the type of vehicles using the routes. Included are images of the main arterial route inland,the N2 freeway and various routes used in and around Durban. 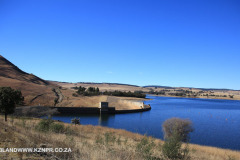 Craigieburn Dam, owned by the Department of Water Affairs is on Route 622 ( S 29d 9m 42s/ E 30d 17m6s). The dam on the Mnyamvubu River was built in 1963 for irrigation purposes. The concrete curvature wall with earthen abutments is 262 metres in length, 39.9 metres high, a capacity of 23million cubic metres and covers 207 hectares when full. 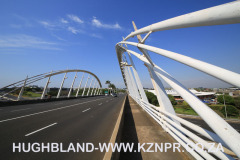 This album has differing perspectives of the recently completed interchange on the N2 and M41 highways in about 2000. The rapid expansion in the Mount Edgecombe, Cornubia, La Lucia Ridge area over the last 15 years had resulted in major traffic congestion. This interchange has freed up the traffic and as a civil engineering project it probably surpasses and other civil engineering project since the EB Cloete interchange was built. 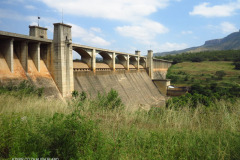 Nagle Dam, on the Umgeni River, to the north of Cato Ridge lies in the Valley of a Thousand Hills. The Dam was constructed and opened on 19 April 1950 by the Administrator Denis Shepstone. The dam which lies in the 3500 Msinsi Nature Reserve was built to primarily supply water to the Durban & Pinetown area. An interesting feature of the dam is the diversionary spillway, which is designed to prevent mud laden flood waters entering the dam and causing it to silt up. The dam capacity is 39 million cubic metres, a surface area of 156 hectares, and the mass concrete wall is 44.3m in height and 393m long. The diversionary weir is in the upper reaches of the dam with a system of floodgates for the flood release. The dam surrounds is controlled by Umsinsi Resorts who offer self catering lodges and camping facilities. This album has images of this site and also of the Table Mountain Catholic Mission which is at the upper reaches of the dam outside the reserve. 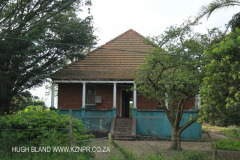 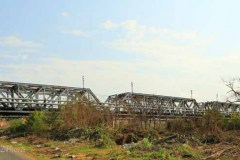 This album has images of South Coast Bridges which includes, Bayhead, Umlaas Canal (Umlazi River), Isipingo, and Umhlatuzana (into the Bay). 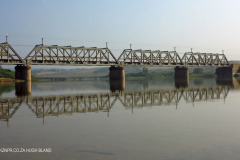 This album has the road and rail bridges between Amanzimtoti and Umkomaas on the KZN south coast. The bridges cross the rivers like the Illovo, Umgababa, Amanzimtoti lagoon, and the Umkomaas River. Some of the bridges such as the Illovo river rail bridge are iconic sights and the Umkomaas bridges vital to the movement of goods. Most of the original bridges built in the late 1800's have been rebuilt and the new N2 the most recent structures built in 1900's. 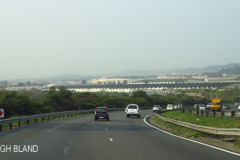 This album features the road (R102 & N2), and rail bridges between Scottburgh and Sezela on the KZN south coast. Crossings include, Mahlangwana, Mpandinyoni, Umgagbaba, Umzinto and Widenham bridges. 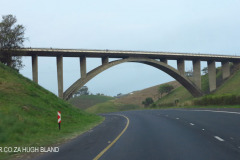 This album has images of the road and rail bridges from Ifafa to north of Port Shepstone. The road bridges include those of the old R102 and the newer N2. Rail bridges include many of the derelict screw pile bridges either abandoned or washed away in the series of floods that have been a feature of the South Coast. Bridges include Anerley, Bazley, Mzimayi, Ifafa, Koshwana, Mtentwini, Mtwalume, Mzumbe and Umhlangankulu. 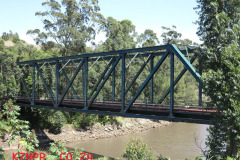 This album has the road bridges from Port Shepstone (Umzimkulu River Mouth), to the iconic Port Edward arch bridge over the Umtamvuma River, in the south, which forms the boundary of KZN with the Eastern Cape. On the way are also the old iron bridges over the Mpenjati River and the Mbezane River, as well as the road bridge above the Uvongo falls. The rail head was at Port Shepstone , so there are no rail bridges south thereof. 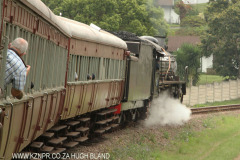 Umgeni Steam railway was formed in 1982, and run by volunteers and has about 20 locomotives and 50 other carriages and wagons. Trains run between Kloof and Inchanga Station through the Valley of a Thousand Hills following the old NGR main line to PMB, dating from 1880. The line has gradients of 1:30 and curves of 90 m radius and less, and a short tunnel near Drummond. The line passes through Gillits, Hillcrest, Bothas Hill and Drummond along the way. A new alternative line was built in 1921 but this line continued to be used and was electrified in 1950 until 1990's, at which stage the line was decommissioned for commercial use. (Ref: Heritage Railway Society of South Africa). This album has images of the stations at Kloof, Bothas Hill and Inchanga, rolling stock based at Inchanga, and images of "Wesley" Class 19D No. 2385 proceeding along the line. 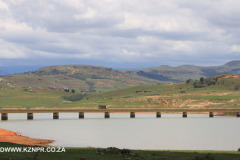